This is the 3rd and final post relating to our memorable Sept/Oct trip to Uganda, aka the ‘Pearl of Africa’.  Although the tale of the trip has unfolded somewhat out of sequence, in large part due to my eagerness to share our experiences in order of priority for us, I thought it might be apt to include a few facts and stats about Uganda in this wrap-up piece.  So here we go, in no particular order:

As mentioned previously; the priority for us was seeing the primates, followed closely by the people, places and the challenge of navigating the roads to see them…..but let’s not forget the rest of the show, being the wide range of wildlife viewing on offer.

All the Parks we visited were run very professionally and with what appeared to be a concerted effort by all to ensure the visitors’ experience was only second to the health and welfare of the local community and the animals. The wildlife wasn’t always easy to spot, perhaps due to the fact we were visiting at the start of the rainy season, with long grass and an abundance of waterholes throughout the Park (both of which made it difficult to spot the elusive big cats).  This said, we were more than satisfied with the game we did see.

We stayed in a diverse range of accommodations, ate wonderful food and met some really lovely folk (locals and travellers alike) and all in all we came away feeling enriched by our experience – life is what you make it after all!

If you want to feel “at one” with nature…you have to take an outdoor shower and be sure to practice your hair washing pose for passers-by! 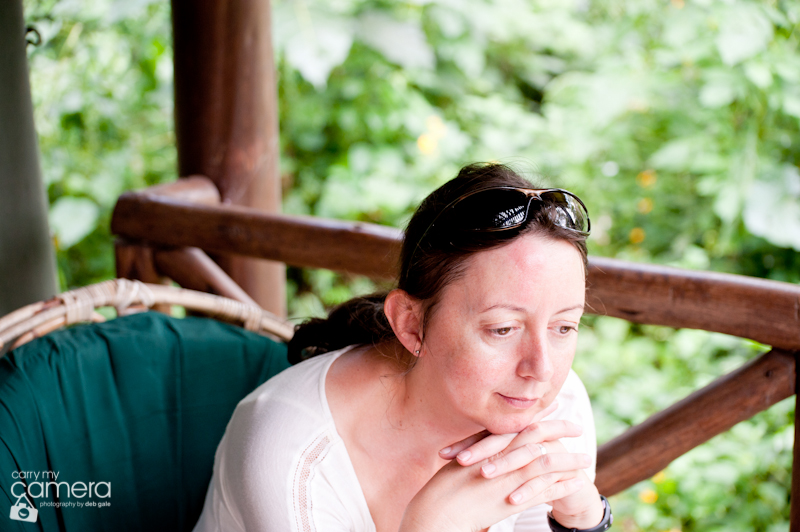 My OCD around mosquito bites (I’m allergic) ensured every inch of our bods were protected at night with our own travel nets and/or those of the hotel/camp, but I couldn’t control what the attacks during the day, for example when I sat on the deck reading and didn’t think to apply repellent to my obviously tasty forehead!

This matriarch let us know that we should keep our distance, so we did, and we witnessed a few of her family members crossing the road from afar.  When we thought the coast was clear, we slowly crept along until we were adjacent to the crossing point, only to find her waiting behind the bush on the left hand side of the photo.  She started flapping and made either a mock or real charge….we didn’t hang around long enough to find out which! 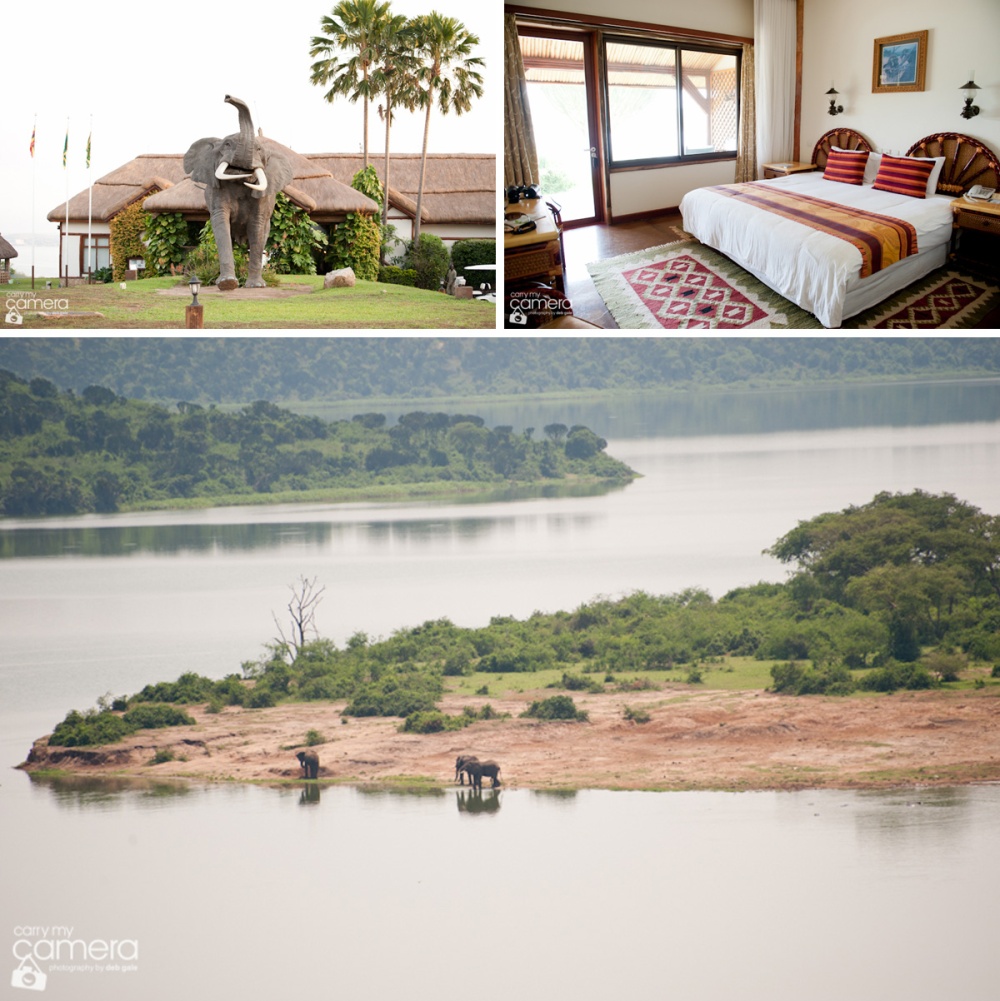 Aside from the Nkuringo, where we didn’t have much option but to stay at the remote gorilla lodge, this was the only real time we splurged and stayed in a high-end hotel in QE National Park.  The elephants on the shore of the lake was the view from our hotel room deck!

Leaving QE Park we were in a bit of a time crunch and almost blew right by the kitty below….in fact, I believe I shouted “lion” and Pete promptly threw ‘blondy’ into reverse and quickly back-tracked 10 metres so we could get a quick look, before she became bored and wandered off back into the bush.

Our final destination before heading back to Entebbe and I can’t imagine a better location to spend it.  We were right on the bank of the River Nile and with interesting and attentive South African camp managers (Chris and Astrid), this lodge stands out as one of the best we have ever stayed at on our African excursions.  We can’t recommend it highly enough. 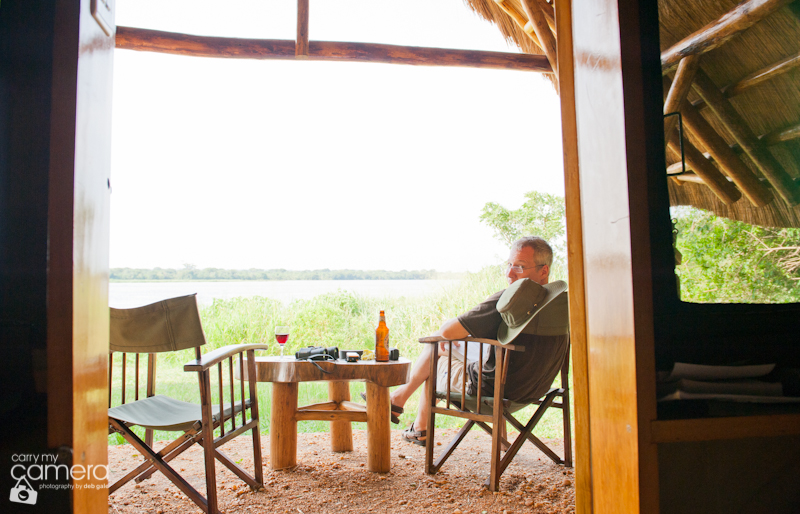 Some of the hippos playing in the Nile during the day, enjoyed the grass right outside our tent at night (like midnight to 3:00 am ish), and the chomping and grunting noises were both disconcerting and comforting at the same time.  For the 4 nights we spent there, I lay in my little camp bed listening and was convinced the noises I heard came from the waterline a few metres away, but on the last night I mustered enough courage to open the flimsy door to our tent and look out, only to find this big guy (or girl) helping themselves to a garden salad! 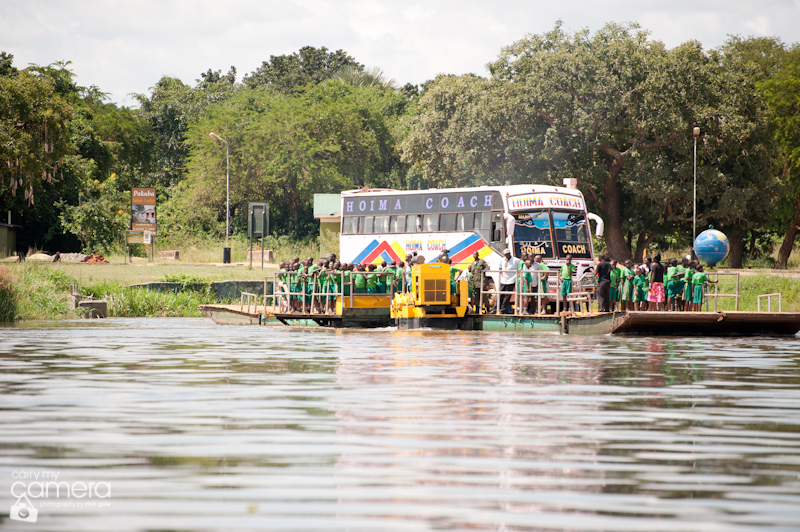 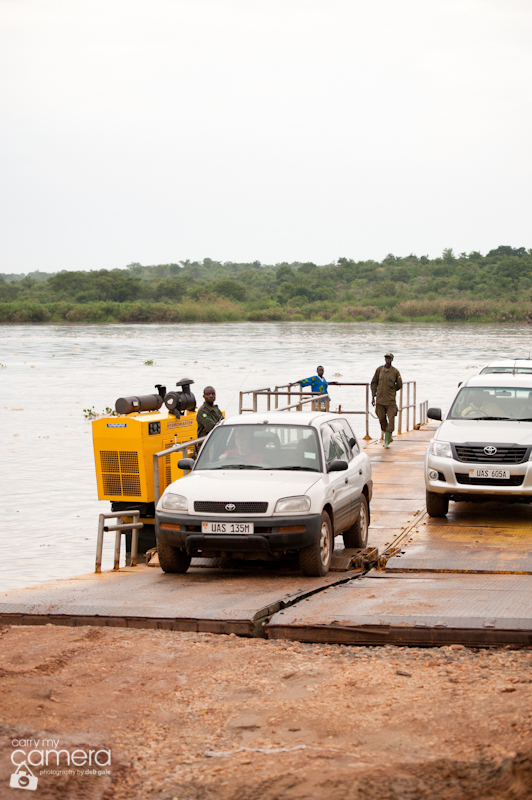 The only way to enter the primo game viewing area of Murchison Falls National Park is to hop on the car ferry. 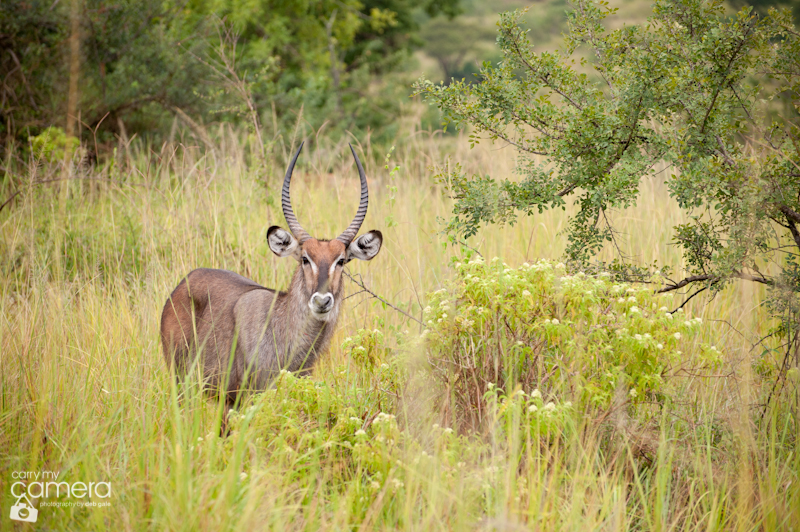 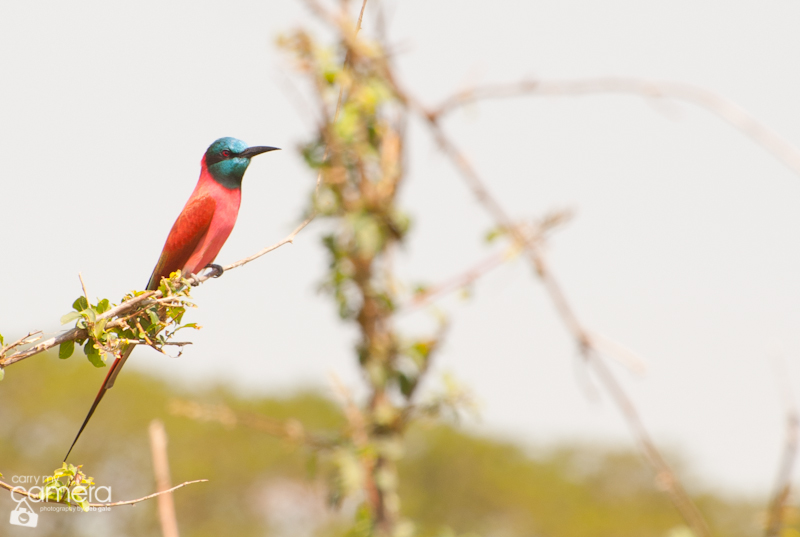 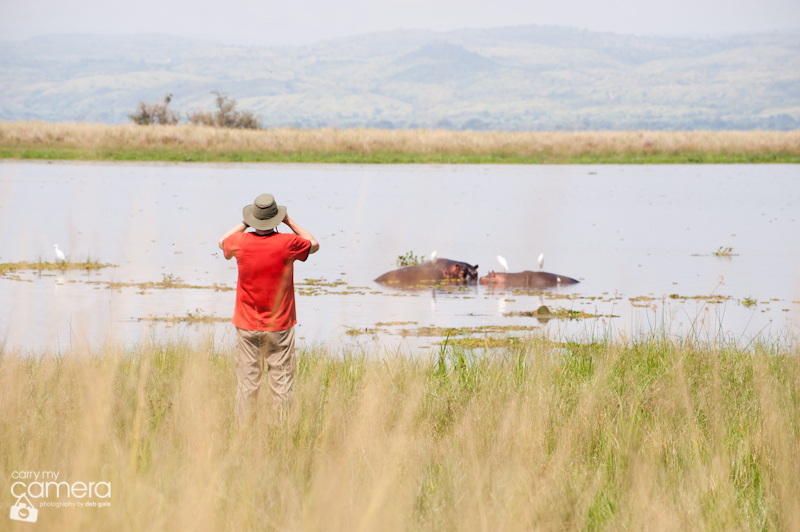 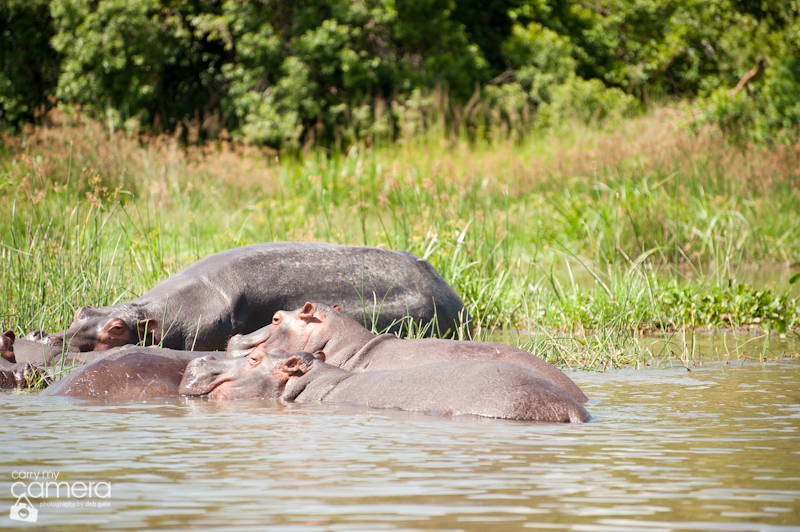 Our Murchison safari guide ‘Dennis’ worked hard and was able to find almost all of the usual suspects! 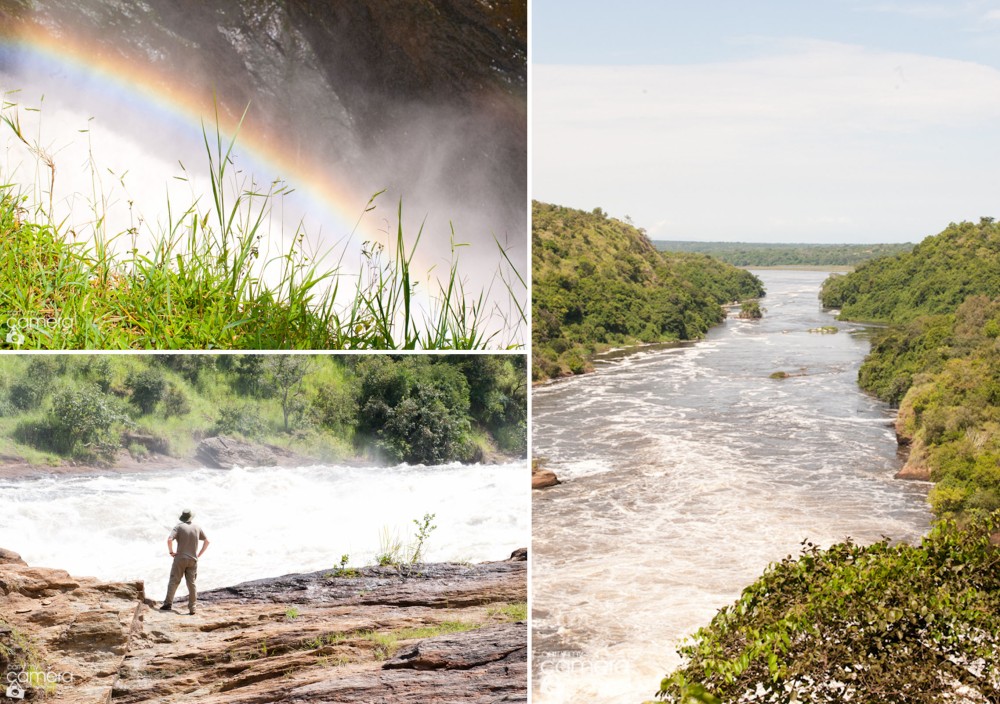 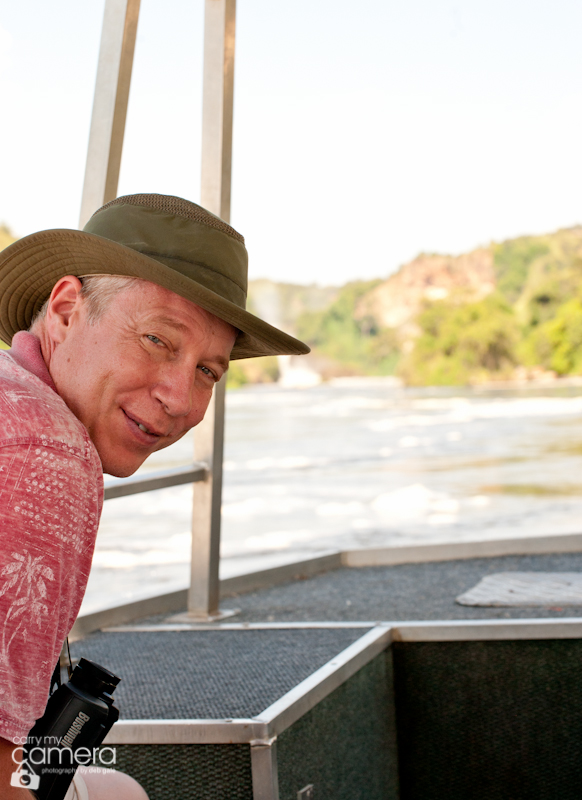 We viewed Murchison Falls from above and below and although it can’t be compared to other notable Falls such as Victoria and Niagara in terms of size and volume of water, it does have a few unique factors i.e.; the volume of the river feeding it flows through a 7 metre gap at the top….it’s been visited by Winston Churchill, Prince Charles, Queen Mother, Humphrey Bogart and Ernest Hemingway’s plane crashed (he survived) a kilometre or so south of the falls.

The closest we’ve been to a giraffe in Africa so far (in the gardens of the Murchison Falls River Lodge!)

One thought on “Uganda….’on safari’”