Not sure quite when we became hikers, but when it happened we took a “go big or go home” approach and justified this on the basis of really pushing ourselves to the limit while we are fit and healthy …you know…., carpe diem!   The first seriously challenging hike I recall was ascending Mount Kilimanjaro, Tanzania in 2008, followed by a 75 km stroll along the West Coast Trail of Vancouver Island in 2009, a few jaunts around Yosemite in 2010 and last year we ventured in and out of the Grand Canyon.  I didn’t put too much thought into it at the time (might have been due to the pain of carrying a fully loaded pack in the stifling heat!), but the Grand Canyon is said to be one of the ‘7 Wonders of the Natural World’, so along with the ‘Great Barrier Reef’ and ‘Victoria Falls’, this would be another incidental check off for us.

I had finished my intermediate photography course shortly before taking off on our little adventure, and was torn about carrying my ‘real’ camera vs. our pocket-sized Olympus point and shoot.  After much deliberation and some advice from a photog friend, I decided this may be the only time I find myself in the Canyon and so wanted to capture the best quality images possible (by my standards that is!).  I’d also learned about the benefits of a polarizing filter in bright sunny conditions and wanted to give that a try, just for the fun of it.

Ultimately I’m glad I opted to pack the extra weight and was pleased with the results of the polarizing filter – the Spring colours were reproduced with the same intense saturation as could be seen by the naked eye at the time.  I also learned that pulling out the camera gear was a good excuse to stop for a breather along the trail and I could frequently work it to my advantage….”honey, let’s stop here for a minute – I really want to get a shot of this amazing xxxx!”

On the downside was the shock and horror of the $200 invoice to get my camera cleaned on returning to Vancouver…apparently the D90 has many orifices for Canyon dust to infiltrate, so I really need to start carrying a plastic bag too!  Oh well, such is life and it was truly an awesome experience, if not one of the most physically challenging hikes so far.   For 2012….head’s up Nepal – here we come! 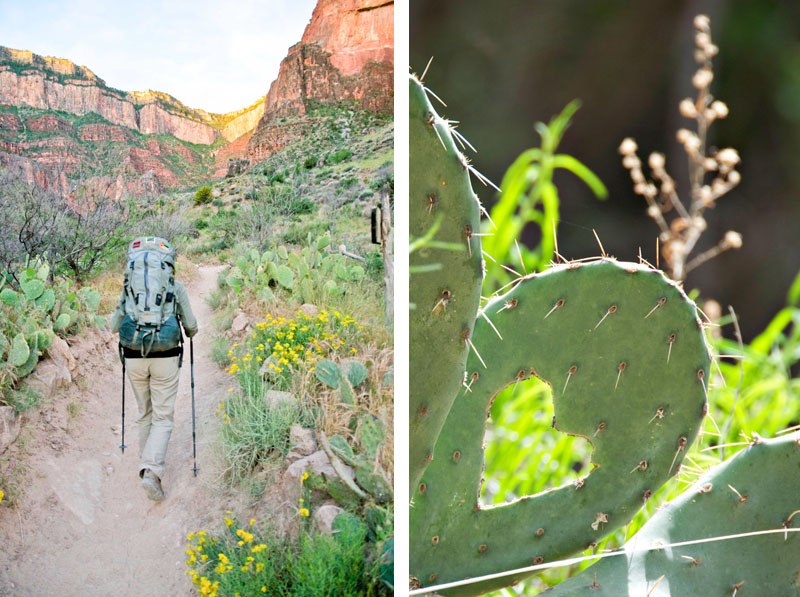 Those cheesy smiles were partly due to the fact that we made it out in one piece and partly because next stop was ‘Vegas baby!’